By: David Goldberg
Share on FacebookShare on TwitterShare on LinkedInShare on other services

In a post from February, I sang the praises of Empirical Bayes, and showed how eBay uses it to judge the popularity of an item. This post discusses an important practical issue in using Empirical Bayes which I call “Peer Groups”.

(Update, August 29, 2017:  I just discovered that the book, Computer Age Statistical Inference by Efron & Hastie, also discusses peer groups in section 15.6, although they call it “relevance” rather than “peer groups.”)

), and use Bayes theorem to estimate

. Bayes theorem requires a prior probability, which I estimated using some of eBay’s voluminous sales data. This method is called Empirical Bayes because the prior is determined empirically, using the data itself.

Which finally brings me to the subject of this post. In the case where the peer group is specified by a continuous variable like price, you can get the best of both worlds—a narrowly defined peer group and a lot of data (hence low noise) to estimate the prior parameters.

The idea is modeling. If the prior depends on the price

, and if there is a model for the dependence, the same data used to compute the prior can be used to find the model. Then an item of price

is assigned the prior given by the model at

, which is essentially the peer group of all items with exactly price

. Since this prior is a prediction of the model, it indirectly uses all the data, since the model depends on the entire data set.

, but rather a probability distribution on

. I assume the distribution of

is a Beta distribution

, which has two parameters. Specifying the prior means providing values of

has a mean of

. As a first step, I examine the dependence of

The fit to the power law

is very good. The values of

. But I do know one thing: sales/impressions is small, so that

is small, and therefore

. It follows that if

fit a power law, so would

. Thus a power law for

is consistent with the plot above.

Here are plots of

. Although somewhat noisy, their fits to power laws are reasonable. And the exponents add as expected: the exponent for 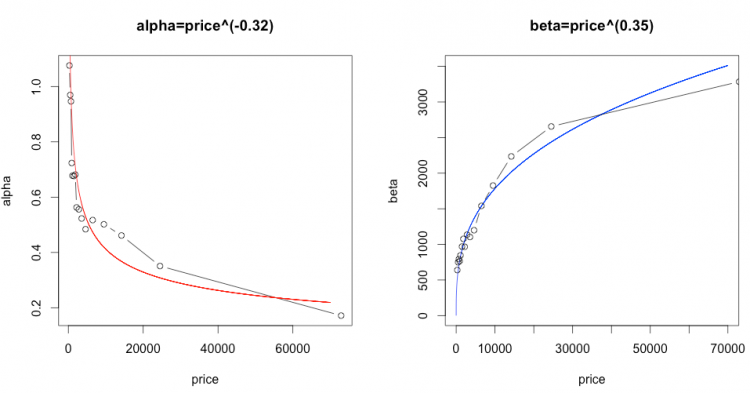 Once the form of the dependence of

on price is known, the Empirical Bayes computations proceed as usual. Instead of having to determine two constants

, I use Empirical Bayes to determine four constants

The details are in the February posting, so I just summarize them here. The

are computed using maximum likelihood as follows. The probability of seeing a sales/impressions ratio of

and max likelihood maximizes the product

Instead of maximizing a function of two variables

Once you have computed

, then an item with

has a posterior probability of

When people hear about the peer group problem with a beta distribution prior, they sometimes suggest using beta regression. This suggestion turns out not to be as promising as it first seems. In this section I will dig into beta regression, but it is somewhat of a detour so feel free to skip over it.

When we first learn about linear regression, we think of points on the

plane and drawing the line that best fits them. For example the

coordinate is the person’s weight, and the line shows how (on the average) weight varies with height.

. In the example above,

is a height, and

represents the distribution of weights for people of height

. The height of the line at

represents the mean of

has a normal distribution with mean

Beta regression is a variation when

they are clearly not from a normal distribution, but might be from a beta distribution. In beta regression you assume that

, or perhaps a function of

. The theory of beta regression tells you how to take a set of

and compute the coefficients

But in our situation we are not given

Empirical Bayes is a technique that can work well for problems with large amounts of data. It uses a Bayesian approach that combines a prior and a particular item’s data to get a posterior probability for that item. For us the data is sales/impressions for the item, and the posterior is the probability that an impression for that item results in a sale.

The prior is based on a set of parameters, which for a beta distribution is

. The parameters are chosen to make the best possible fit of the posterior to a subset of the data. But what subset?

There’s a tradeoff. If the subset is too large, it won’t be representative of the item under study. If it is too small, the estimates of the parameters will be very noisy.

If the subset is parametrized by a continuous variable (price in our example), you don’t need to decide how to make the tradeoff. You use the entire data set to build a model of how the parameters vary with the variable. And then when computing the posterior of an item, you use the parameters given by the model. In our example, I use the data to compute constants

. If the item has price

impressions, then the parameters of the prior are

and the estimated probablity of a sale (the posterior) is