Skip to main content
Data Infrastructure and Services in Engineering

By: Donovan Hsieh
0
Share on FacebookShare on TwitterShare on LinkedInShare on other services

Data modeling for RDBMS has been a well-defined discipline for many years. Techniques like logical to physical mapping and normalization / de-normalization have been widely practiced by professionals, including novice users. However, with the recent emergence of NoSQL databases, data modeling is facing new challenges to its relevance. Generally speaking, NoSQL practitioners focus on physical data model design rather than the traditional conceptual / logical data model process for the following reasons:

However, the flexible schema is not without its challenges. For example, dynamically created database objects can cause unforeseen database management issues due to the lack of DBA oversight. Furthermore, unsupervised schema changes increase DBA challenges in diagnosing associated issues. Frequently, such troubleshooting requires the DBA to review application code written in programming languages (e.g., Java) rather than in RDBMS DDL (Data Definition Language) – a skill that most DBAs do not possess.

Given the nascent state of NoSQL technology, there isn’t a professional-quality data modeling tool for such tasks. It is not uncommon for stakeholders to review application source code in order to uncover data model information. This is a tall order for non-technical users such as business owners or product managers. Other approaches, like sampling actual data from production databases, can be equally laborious and tedious.

It is obvious that extensive investment in automation and tooling is required. To help alleviate this challenge, we recommend that NoSQL projects use the business and data model design process shown in the following diagram (illustrated with MongoDB’s document-centric model): 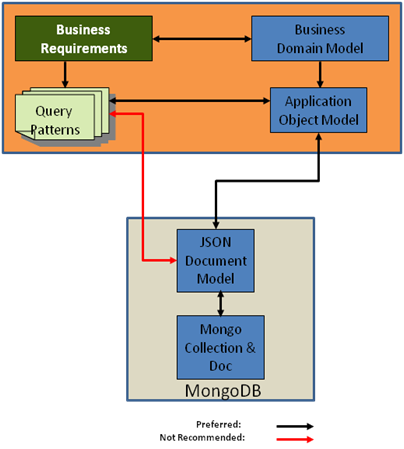 Interestingly enough, old-school RDBMS data modeling techniques still play a meaningful role for those who are new to NoSQL technology. Using document-centric MongoDB as an example, the following diagram illustrates how one can map a relational data model to a comparable MongoDB document-centric data model: 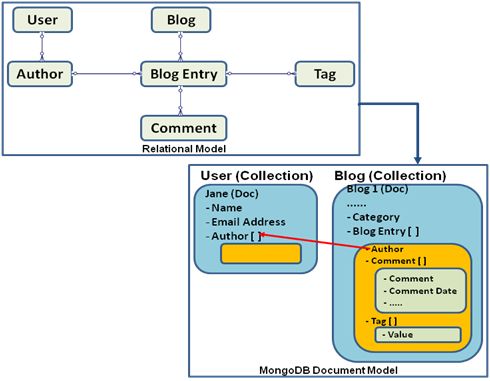 In the relational world, logical data models are reasonably portable among different RDBMS products. In a physical data model, design specifications such as storage clauses or non-standard SQL extensions might vary from vendor to vendor. Various SQL standards, such as SQL-92 and the latest SQL:2008 as defined by industry bodies like ANSI/ISO, can help application portability across different database platforms.

However, in the NoSQL world, physical data models vary dramatically among different NoSQL databases; there is no industry standard comparable to SQL-92 for RDBMS. Therefore, it helps to understand key differences in the various NoSQL database models:

The following diagram illustrates the comparison landscape based on model complexity and scalability: 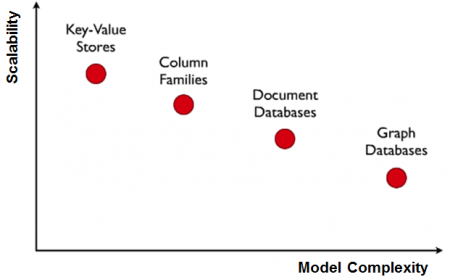 It is worth mentioning that for NoSQL data models, a natural evolutionary path exists from simple key-value stores to the highly complicated graph databases, as shown in the following diagram: 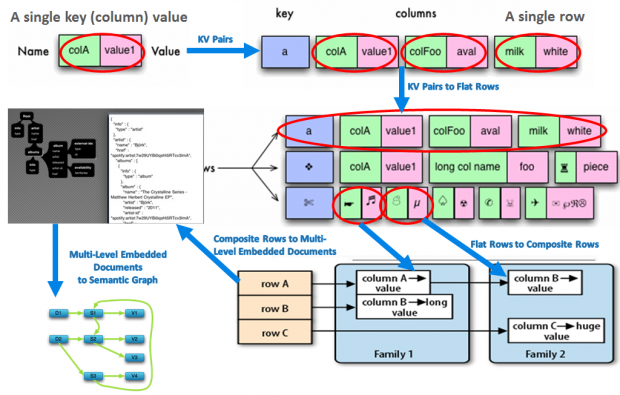 For conceptual data models, diagramming techniques such as the Entity Relationship Diagram can continue to be used to model NoSQL applications. However, logical and physical NoSQL data modeling requires new thinking, due to each NoSQL product assuming a different native structure. One can intuitively use any of the following three visualization approaches, using a document-centric data model like MongoDB as an example:

Pros – It can easily reverse engineer a hierarchical model into a visual representation from existing JSON documents stored in NoSQL databases like MongoDB.
Cons – As of this writing, JSON Designer is available only on iPhone / iPad. Furthermore, it does not include native DB objects, such as MongoDB indexes. 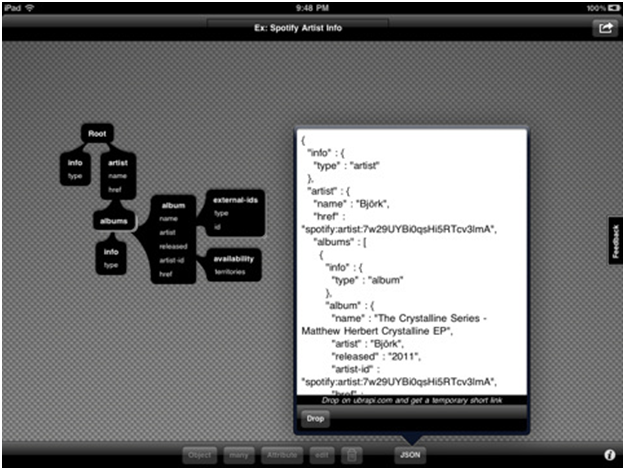 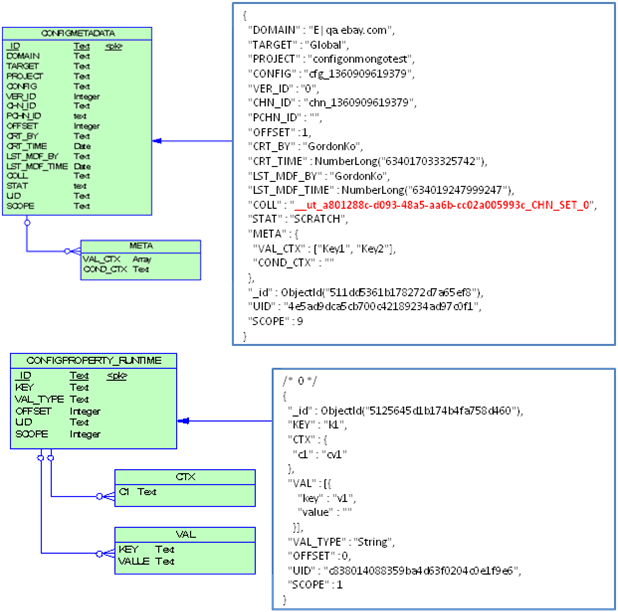 In a future post, we’ll cover specific data model visualization techniques for other NoSQL products such as Cassandra, which is based on the Column Family structure.

Like any emerging technology, NoSQL will mature as it becomes mainstream. We envision the following new data modeling opportunities for NoSQL: