By: Paul Zhang and Tao Jin
Share on FacebookShare on TwitterShare on LinkedInShare on other services

A look at how our eBay technologists created an automatic testing solution for batch applications.

This article introduces a new testing methodology for 500+ batch applications at eBay. These batch applications contain 10,000+ jobs running everyday to handle offline eBay business, for example, the monthly invoice jobs are responsible to record all transactions on a customer's primary account for subscriptions. In this piece, we explore the challenges of batch application testing when upgrading — and provide a solution to resolve the pain points of testing.

A batch application is different from the service system, because it has no web container inside an instance. For a batch pool, it will wait for the job command from an upstream job scheduler to run based on a given schedule. Once the job command is complete, the application process will quit, and return the exit code and exit state back to the scheduler.

Batch testing is always a challenge. Generally, a batch application is not idempotent since most are manipulating files, reading databases, etc. Those data sources can be updated frequently, and a batch job can’t get the same results even with the same input parameters.

The traditional way of testing new changes, such as a framework upgrade, for a batch application is to deploy the new code directly into production for an online verification. This can be a risky approach, and there should be better testing to cover the below use cases.

A batch testing system is a brand new testing solution. It is designed as a centralized, yet independent system. It supports running the same job to the same instances based on different versions of codes and provides end-to-end comparison automatically.

The approach would resolve the pain point mentioned above.

The system provides three types of comparison to solve the challenges in testing.

The workflow of the batch testing system is shown below. 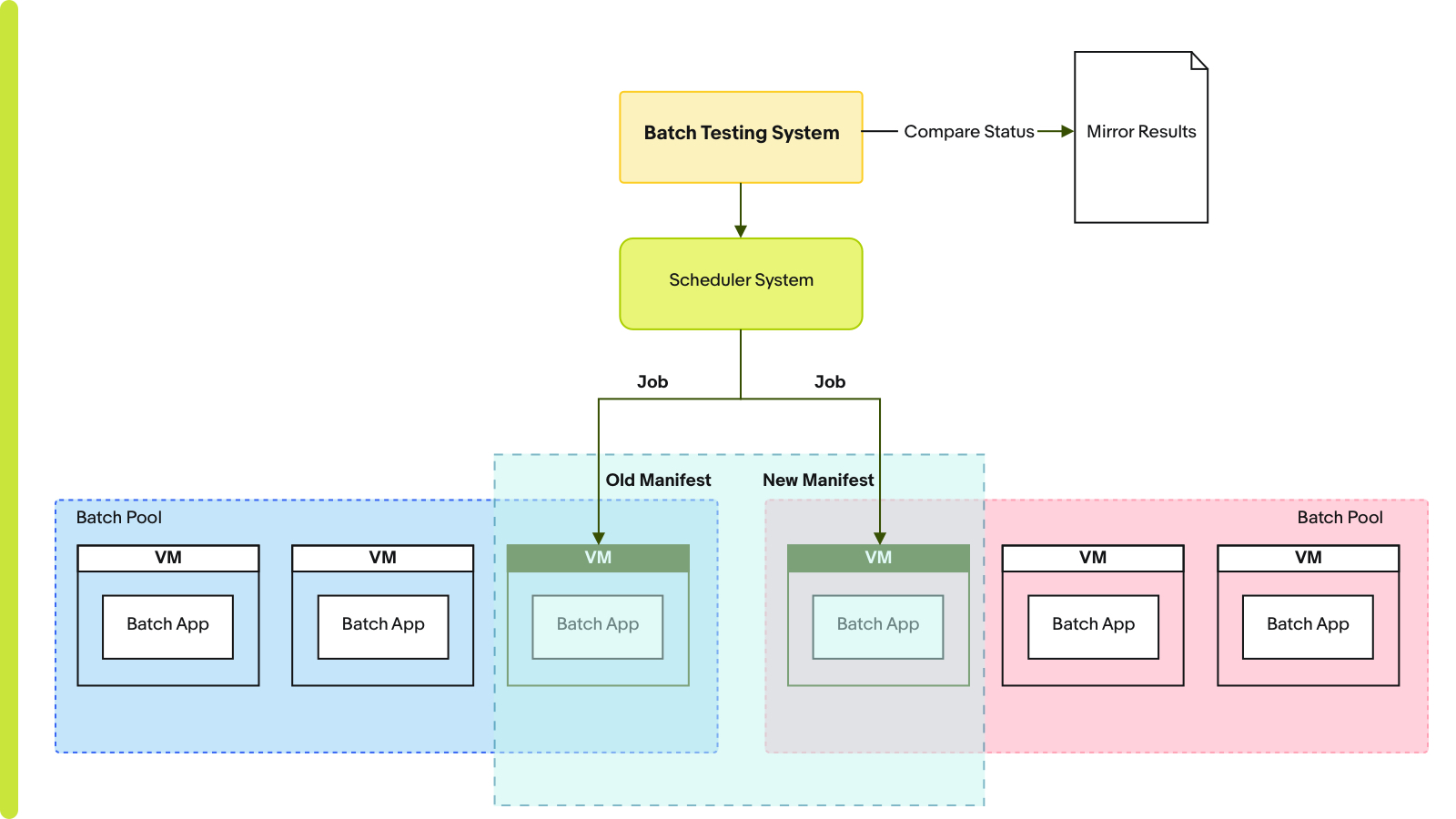 The detailed mirror steps are to:

Inside the batch testing system, there are several components to work together. The controller  is the key component as an orchestrator to process the following working sequence.

The configuration file is the key input to measure whether the test is green or not. The rule setting of each application depends on the application needs — for instance, if one application warms up some caches when starting up — the allowed execution time should accordingly be set longer.

The controller will read the configuration file which breaks down the testing rules from the git repository. Here is a sample file with an explanation to elaborate how to set up the rules.

From the example file, the user of the testing tool has flexibility to tuning the rules according to the application’s real running state. Moreover, if there are some other jobs of this application that are suitable for test jobs, they can be configured as well, meaning it supports multiple jobs in the configuration file. Even if there is no such job, the framework job is configured by default.